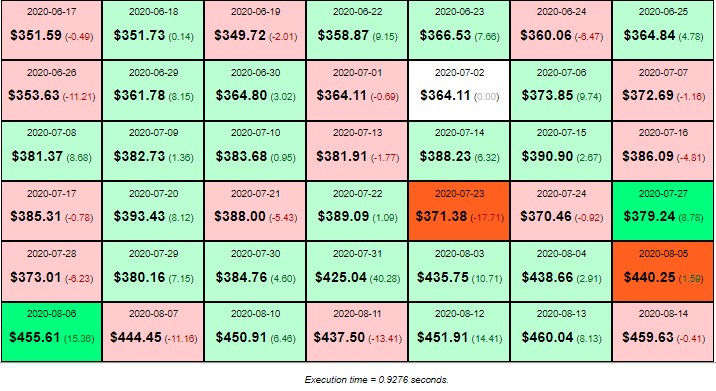 It’s been about a month since I’ve posted any updates on my program. Throughout this whole time, I’ve been paper trading with the picks my program makes, and so far with relatively good results.

Every night, I download the day’s EOD pricing and then run my program through all the stocks (some stocks are eliminated due to lack of volume, lack of volatility, etc.). At the end of the run, it spits out a list of stocks it bought and sold on the day; the stocks that were bought are scored based on a variety of numbers, and ranked from highest to lowest. There are some of what I call “outliers”, stocks with scores that are really out of range, which most of the time are caused by the program landing some massive mega trade, like if it happened to buy a stock for cheap and sold it after the it blew up after reporting record-breaking earnings. Those “blips” throw off the scores a lot, and that’s one of the things that’s on my “to-do list”, how to deal with them.

Based on the results my program gives me, I’m tracking 4 separate “portfolios”: one for the highest ranking pick, one for a mid-range pick, one for the lowest pick (with a positive score), and one that evenly purchases all 3 of those picks. All four portfolios are up, with the mid-range portfolio doing the poorest, having gotten off to a bad start by picking SOLO, which dropped more than 10% toward the end of December. It followed that with MOGO, which made up for the loss with a fast 25% gain, but then promptly dropped 10% from there. It’s now currently holding some MYCNX, which is also down just a pinch. Overall, the mid-range portfolio is up about 2%.

The low pick portfolio is somewhat surprising, although it could be attributed to luck. It has bought and held on to TXMD, which has increased about 50% since the program purchased it in mid-December. It’s seen a recent acceleration in increase, so will be interesting to see where it goes from there.

The high pick has done amazingly well, but that one I definitely attribute to luck, 100%. That one started off shaky, buying AHPI, which decreased in value. It reached about halfway toward my stop-loss limit, but eventually blew up to a nice 12% profit. After selling that one, the program chose to buy NVAX, which was the real luck of the draw; just a few days later, the stock doubled in price, thanks to news regarding vaccinations. NVAX is currently at around a 115% profit, with the overall portfolio standing in the green by 133%. If anyone is wondering, no, my program is not referencing any news or social media for information or rumors to trade on, it’s simply looking at prices, nothing else. In this case, it got very lucky.

The fourth portfolio, which holds all 3 picks, is doing well mainly because of the NVAX. It currently stands at a 51% increase.