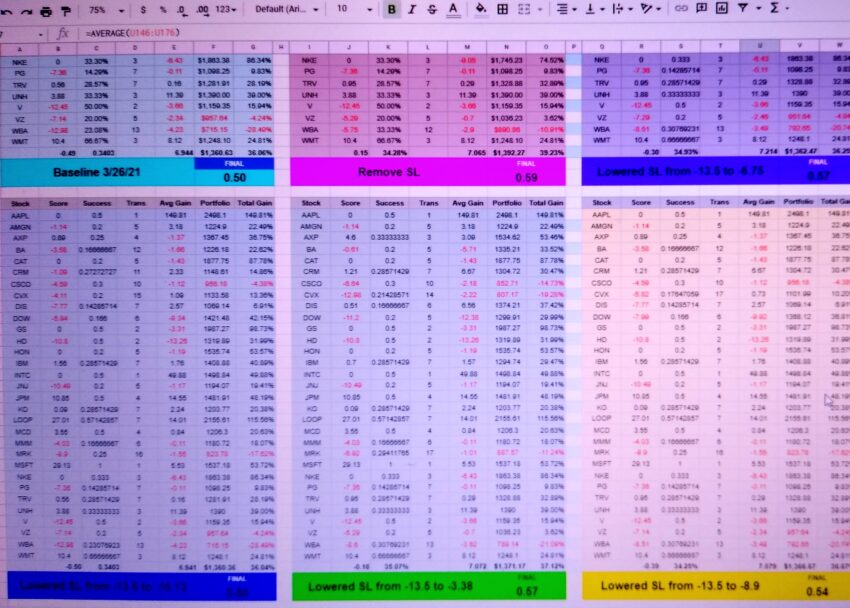 So I’ve been live trading using picks from my program for about 3 months now, with mixed results. Things got off to a great start, but ultimately the picks started getting worse and worse. It could very well be the market doesn’t want to play nice, as it’s been very schizophrenic as of late. Could just be it’s not suitable to be statistically and technically analyzed with the current volatility.

Still, though, it’s clear there’s room for improvement, and I’ve been trying to achieve just that since last week. The first major update to my program has begun, starting with a few new conditions to check for, and adjusting the score values for all the conditions, as well as the target scores to trigger buying and selling. Doing so has yielded a couple interesting results.

First and foremost, my final scoring system is highly questionable (granted, it’s all subjective and some of it arbitrary). After comparing results from my current live version with my updated version, I noticed a lot of the stocks I was testing (from the DJI) were doing better financially, but scoring worse; this tells me a lot of work needs to be done on the scoring system to make it both more accurate and easier to understand differences between two scores.

Second, one of the conditions I have in place is a Stop-Loss condition, which simply states if a stock’s price drops 10% or more, to try to sell it. Until now, I’d simply given it an arbitrary score that would mostly ensure it would trigger a sell (e.g. 50% of the score necessary to trigger, leaving room for any other worthwhile conditions to counter it). However, while creating baseline tests on individual conditions, I discovered that eliminating the Stop-Loss completely yielded rather excellent results. Haven’t looked deep into why this is yet, but at first glance I have to assume it’s because those stocks that did better quickly picked up after dropping 10% or more, and either mitigating the loss or going as far as to yield a gain.

So far the new version is yielding better results and trading much more conservatively. Whereas some stocks would trade anywhere from 2 to 30-40 times in the last 2 years, now they’re closer to 1 to 10 times. Success rate (# of positive gains vs. total # of trades) is marginally better, but average gains are far improved.

Next step I need to take is to start working in daily OHLC pricing; at the moment, I’m only using closing prices, which I’ve come to realize is throwing things off more than I’d like. I’ve known from the get-go that the way I have everything set up, I’d be acting on day-old data (i.e. my program “trades” today, but I can’t act on that information until tomorrow). But compounding things further is that the closing prices aren’t necessarily the ideal prices. If a stock closes at $10, but opens at $9, I’d rather trade earlier closer to $9 than $10. Likewise, if $10 was the closing and the low price, compared to, say, an opening of $11, of course it’d be best to wait until end of the day to get the lower price. So this will be the next major change I’ll be integrating, starting this weekend.